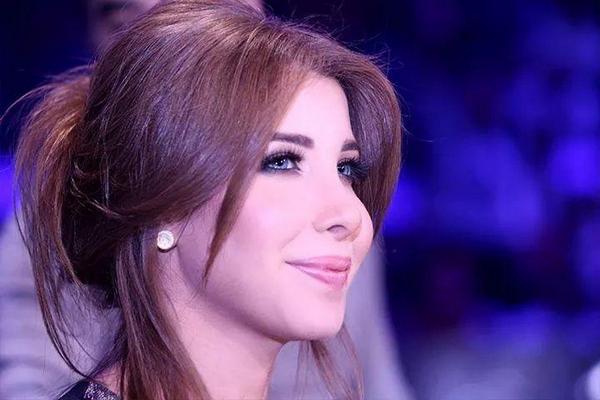 Lebanese recording artist، Nancy Ajram became on the most searched on Google top-trending searches in Saudi Arabia after she performed Thursday evening her first-ever concert in Saudi Arabia, at Jeddah Season festival، in Jeddah، Saudi Arabia، amid a large crowd.
She performed a number of her famous songs including "Ma Tegi Hena"، "Akhasmak Ah"، "Oul Tani Keda"، and others.
The Jeddah Season festival، which began on June 8 and runs until July 18، forms part of a major drive to boost tourism in the KingdomMost of the Jeddah Season events will be spread across the venues of King Abdullah Sports City، Jeddah’s historical area، Al-Hamra Corniche and Jeddah Waterfront, according Arab news.
Hana El Zahed dazzles in her latest Instagram photos
Egyptian actress، Hana El Zahed posted on her official “Instagram” account new pictures of herself.
Hannah looked stunning in a casual look، with simple make-up and hair-style، which suited to the summer atmosphere.

Dress by my talented friend @par.hannahdagher 🌻

Lekaa Elkhamissi hits the gym
Egyptian actress، Lekaa Elkhamissi shared with her fans on her official “Instagram” account a new photo of herself at the gym.
The photo stirred a state of controversy among her fans، who expressed their admiration with her fitness and elegance.

Watch: Rania Youssef show support to Egyptian football national team and Mohamed Salah
Egyptian actress، Rania Youssef took to her social media accounts to show her support to Egyptian football national team and Liverpool winger and Egyptian squad forward Mohamed Salah.
“All the best for our national team.. God willing، the championship will make us all happy. # African Cup of Nations # Egypt # National team” she captioned.
Rania posted new photos of herself while wearing national team's Mohamed Salah Jersey، showing her support in her own way with a suitable look for the most important sporting event on the scene
She chose a simple make-up and hairstyle، which gained the admiration of her fans across social media.
This coincides with the 2019 Africa Cup of Nations kicking off in Egypt on June 21.
Noteworthy، Egypt won the right to host 2019 Africa Cup of Nations (AFCON).
CAF President Ahmad Ahmad signed the contract with EFA President Hany Abu Rida، as the championship scheduled to runs from June 21 to July 19.
Egypt has already hosted four editions of the cup: in 1959، 1974، 1986 and 2006.
The Pharaohs have won the competition seven times.

Nicki Minaj Announces New Song 'Megatron' Release Date!
Nicki Minaj is getting ready to drop a new song!
The 36-year-old rapper took to Twitter on Thursday to announce that she will be releasing her new song “Megatron” next Friday, June 21st.

Donald Trump: US president in 'Prince of Whales' Twitter error
US President Donald Trump has caused a splash on Twitter after he tweeted to say he had met the "Prince of Whales".
Mr Trump made the mistake, intending to refer to Prince of Wales, Prince Charles, in response to articles following an ABC news interview.
He said he would listen if a foreign government gave damaging information about a political rival without necessarily reporting it to the FBI.
In the tweet, he accused media reporting the statement of "fake news".
Mr Trump subsequently deleted his tweet and corrected his error.
Referring to his recent UK state visit, the president initially wrote on Twitter: "I meet and talk to 'foreign governments' every day.
"I just met with the Queen of England (U.K.), the Prince of Whales, the P.M. of the United Kingdom, the P.M. of Ireland, the President of France and the President of Poland.
"We talked about "Everything!" Should I immediately call the FBI about these calls and meetings? How ridiculous! I would never be trusted again.
"With that being said, my full answer is rarely played by the Fake News Media. They purposely leave out the part that matters." 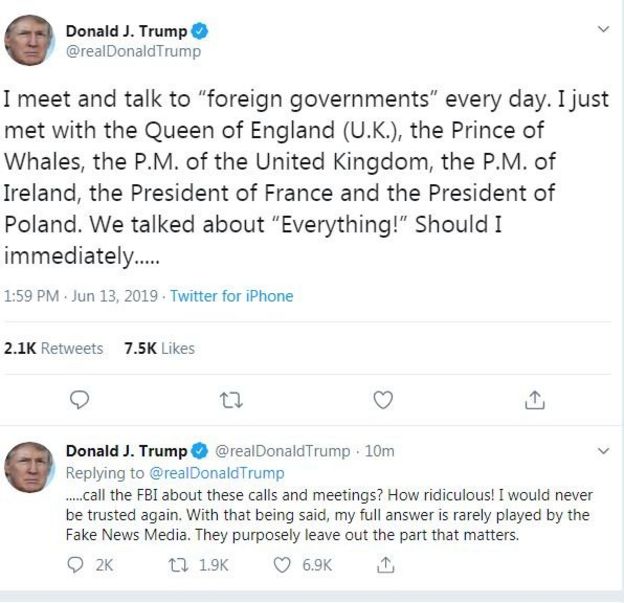