The rumor began circulating after the promo for her episode on TV program “Tawam Rouhi”، were broadcasted، which is set to be aired on Friday.

“About the promo for my episode on TV program “Tawam Rouhi”” She stated via “Instagram stories” “The news about having this illness is not true، I am fine thank god، they took that part and added it to another question when they were doing the montage، I hope it will be unintentionally.”

The photos، which featured Lekaa in a summer tan، were captioned with: “Beach time”.

Ahmed Ezz hits the gym
Egyptian actor، Ahmed Ezz shared with his fans on his official “Instagram” account a new photo of himself at the gym.

The photo stirred a state of controversy among his fans، who expressed their admiration with his fitness.

Amr Saad shares a new photo with Mike Tyson
Egyptian actor، Amr Saad shared with his fans on his official “Instagram” account a new a photo of himself with American former professional boxer، Mike Tyson from the behind-the-scenes of their latest film “Hamlit faroon” (Pharaoh’s campaign)، which is currently premiering the cinemas.

“Behind the scenes” he captioned.

Watch: Yasmine Sabri doing yoga
Egyptian actress، Yasmine Sabri posted on her official "Instagram" account a new photo of herself، which showed her in high spirits while she was performing an upside-down yoga exercise at the gym.

The pictures stirred a state of controversy among her fans، who expressed their admiration with her fitness and flexibility.

“There is this girl who stole my heart and she calls me Daddy ❤❤” he captioned.

Ed Sheeran Adds Cardi B، Bruno Mars، and others to ‘Collaborations’ List
With less than a month to go، Ed Sheeran has uncensored his list of duet partners on the “No.6 Collaborations Project” album that’s due out July 12 and، not surprisingly، Justin Bieber is far from the only superstar in the bunch.

Last month، Sheeran shared the track list، but he coyly blacked out most of the names of his collaborators، which he revealed in full on Tuesday. The album includes his previously released singles، “I Don’t Care” featuring Justin Bieber، which Sheeran also re-recorded for an acoustic version، and “Cross Me” with Chance the Rapper and PnB Rock. In an earlier Instagram post، Sheeran explained what prompted him to pursue the album.

“Before I was signed in 2011، I made an EP called No.5 Collaborations Project،” Sheeran wrote. “Since then، I’ve always wanted to do another، so I started No.6 on my laptop when I was on tour last year.”

Thanks to all the amazing artists I’ve worked with on this record for sharing your talent with me. No.6 Collaborations Project comes out on July 12, hope you like it as much as I do @travisscott @thegr8khalid @camila_cabello @iamcardib @chancetherapper @pnbrock @stormzy @yebbasmith @justinbieber @eminem @50cent @thuggerthugger1 @theuglygram @ellamai @paulolondra @santandave @hermusicofficial @meekmill @artisthbtl @skrillex @brunomars @chrisstapleton

Shawn Mendes and Camila Cabello have a brand new collaboration coming out!

The news was confirmed with a snippet from their upcoming music video for the song on Shawn‘s Instagram.

Shawn and Camila dropped hints along the way that they were working on something new together، after sharing a snap from backstage at the Grammys before grabbing lunch together in LA.

The upcoming collab marks their second together. The first was back in 2015 with “I Know What You Did Last Summer”.

Eden Hazard kept it short and sweet when bidding farewell to his Chelsea team-mates in their WhatsApp group.

The Belgian star sealed his long-awaited move to Real Madrid earlier this month with the La Liga giants splashing out a deal worth £150million for his signature.

Hazard fired the Blues to Europe League glory before departing for Spain where he was officially presented as a Madrid player at the Bernabeu last week.

His former team-mate Emerson Palmieri admitted that Hazard's exit had not quite sunk in until he left their players' group chat.

The Brazilian revealed there had been little activity in the group in recent weeks with several players taking advantage of their break by jetting out of the country. 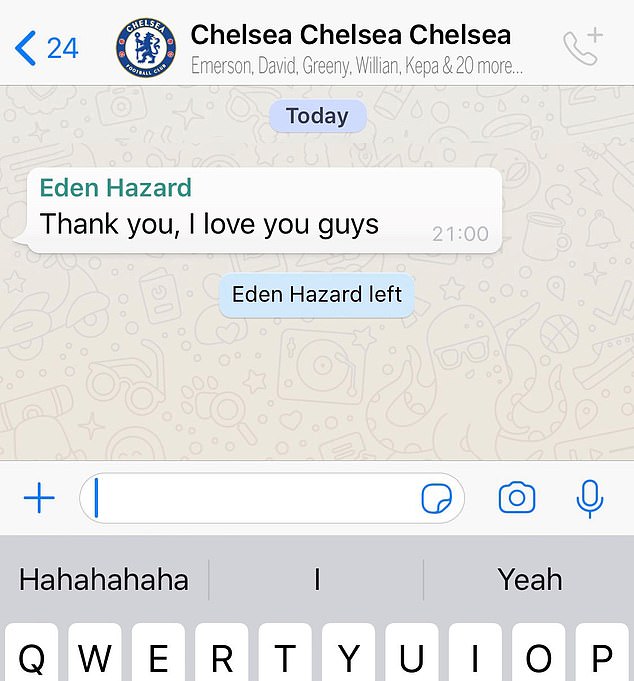 Trump-Xi meeting at G20 raises hope for trade truce
US President Donald Trump and Chinese leader Xi Jinping have agreed to meet at the G20 summit in Japan next week، raising hopes for a truce in the bruising trade war between the world's top two economies.

"Had a very good telephone conversation with President Xi of China. We will be having an extended meeting next week at the G-20 in Japan،" Trump said on Twitter.

"Our respective teams will begin talks prior to our meeting،" he said ahead of the 28-29 June summit.

Had a very good telephone conversation with President Xi of China. We will be having an extended meeting next week at the G-20 in Japan. Our respective teams will begin talks prior to our meeting.