Why are US tourists dying in Dominican Republic?

A New Jersey man has become at least the ninth US tourist to die in the Dominican Republic in a string of deaths the FBI is investigating, according to BBC.

Relatives of Joseph Allen, 55, say he was healthy and had been a frequent visitor to the Caribbean island nation.

Several of the tourists who died over the past year drank from their hotel minibar before falling ill, say family.

The FBI is helping local authorities with toxicology tests. No link has been established between the deaths.

What happened in the latest case?

Joseph Allen's family say he arrived at the Terra Linda Resort in Sosua to celebrate a friend's birthday on 9 June.

His sister told ABC that on 12 June he had remarked to friends he was overheating. He decided to shower and go to bed early.

The next day, he didn't answer knocks on his door. When a maid entered, she found him cold and stiff on the floor, according to his sister, Jamie Reed.

His 23-year-old son, who had flown there to be with him on Father's Day, landed to discover he was dead.

Jason Allen told NBC: "We want some closure to figure out what's going on and why this is happening."

His family are currently trying to repatriate his body to US where they hope that a post-mortem examination will reveal his cause of death.

Who else has died?

California man Robert Bell Wallace, 67, died on 14 April after getting sick at the Hard Rock Hotel & Casino in Punta Cana.

The same month John Corcoran died in his hotel room, according to his sister, Barbara Corcoran, who stars on TV show Shark Tank. She attributed his death to "natural causes".

Miranda Schaup-Werner, a 41-year-old from Pennsylvania, died on 25 May after drinking from her hotel minibar, US media report.

Her body was found hours after she checked into the Luxury Bahia Principe Bouganville.

On 30 May, a hotel worker discovered the bodies of Cynthia Ann Day, 49, and Edward Nathaniel Holmes, 63, in their rooms.

Local investigators say both had internal bleeding and fluid in their lungs.

The 11 June death of Leyla Cox, 53, was confirmed by the US State Department. Her son has questioned the official ruling, which found she had suffered a fatal heart attack, pulmonary edema and respiratory failure.

Last July, David Harrison died at the Hard Rock Hotel & Casino. His wife said he had been snorkelling the day before his death.

And last June, 51-year-old Yvette Monique Sport died at a Bahia Principe hotel in Punta Cana, after having a drink from the minibar, her sister told US media. Officials said a heart attack was the cause. 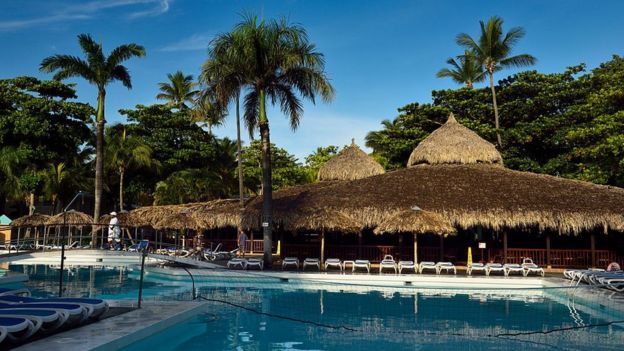 Perhaps it's just a coincidence?

Local officials have called the deaths "unrelated and isolated", attributing them to natural causes.

The US embassy in Santo Domingo said it had not yet found anything to indicate the cases are linked.

The deaths represent a tiny percentage of the Americans who holiday on the island every year.

Seven million tourists visit the Dominican Republic annually, with nearly half coming from the US.

Tourism Minister Francisco Javier Garcia said earlier this month: "These are isolated incidents and the Dominican Republic is a safe destination."

Who else has got sick?

Dozens of other visitors also said they were sickened after staying at hotels and resorts around the country in the past year.

A group of around 40 Oklahoma high school graduates say their trip in early June was spoiled when they ate at a Japanese restaurant managed by the Hard Rock Hotel & Casino in Punta Cana, where two Americans died after getting ill.

A group of 114 fans of Jimmy Buffett from Oklahoma say about half their group was sickened after a trip to the Hotel Riu Palace Macao in Punta Cana in April.

"The common thread with everybody that did get sick is that they swam in the swim-up bar pool and/or they had a drink from the swim-up bar," said Dana Flower, a travel agent for the group, the Central Oklahoma Parrothead Association.

"So it could be related to that pool."